I must be enjoying LotRO again, I only take screenies when I'm really getting into it. 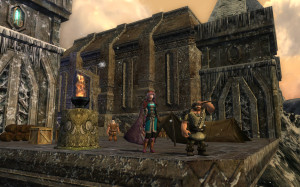 Here we see Lachwen Shimmerlight, dressed for the cold and wondering what the heck she's doing way up in Forochel. Surely those long-lost second age texts aren't that interesting! 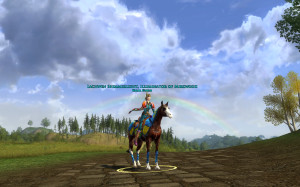 Here's Lachwen looking a bit more typically like herself. I suspect if there were unicorns in Middle-earth, she'd probably be riding one. She's that type of gal. 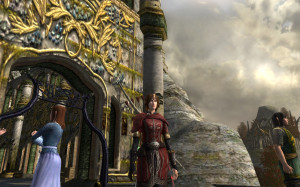 And here's Lachwen's sister Rufaniel, looking stern and badass. I suspect Lachwen's just said something daft, and Ruf is interested in exactly none of her shenanigans.

I'm having a lot of fun with these two, and I have been getting the stirrings of ideas for a "Life Of a Bounder"-esque series of story posts with them, sometimes interacting, sometimes off doing their own thing. To do that, of course, I have to collect screenies, but I've got a fair number of Lachwen already and will pick up more with Rufaniel as she gets played. She hasn't made it to Mirkwood yet in-game, but when she does I suspect I'll pick up where Lachwen's tale once left off and start trying to blend them in.

I'm also jonesing to find a regular crowd to run with again. Back when it was Poppy, Pippin, Galdor, Nim, and me, running all over Angmar and Moria, those were fun times, and I want to find another group like that. Of course, they're all way up at the level cap, while I'm nursing a L50-ish and a L75-ish, but I'll catch up with time. :)

I don’t know why I find these progress shots so fascinating, I just do.

Originally published at gneech.com. You can comment here or there.