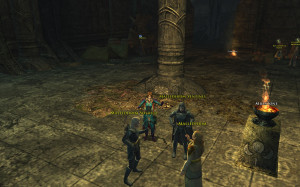 "Yeah, yeah, fine, go kill the warg pack-leader, I'll do it in a minute. But can we PLEASE talk about getting me a boat to go up the Anduin?"

Lachwen decided today that she'd backfilled enough of her Volume I story quests, after one too many "ride halfway across Middle-earth to talk to X, who just sends you right back to the other end of Middle-earth to talk to the person who just sent you there" quests. Unfortunately, most of the latter half of Volume I is like this, and when she got a request to go down, down to Goblin Town to grab a bag of gems in the middle of what's supposed to be a time-sensitive chase after a magic ring, she just said, "You know what? To heck with this."

I then tried going back to Enedwaith, a zone which she only stayed in long enough to outlevel, but only a few of the quests awarded enough XP to justify the time investment and none of them particularly interested her (or me-- Enedwaith was a fun zone the first time around, but only that), and there were no deeds there worth the doing. Looking at both her quest and deed log, it turns out she'd be better served by going back to Southern Mirkwood and finishing it off. There are multiple explorer deeds there, the warg-slayer deed gives her a useful virtue point, and there are a fair number of green quests and mobs, so she can actually earn some XP and do some combat with things that actually fight back.

So I figure, what the hay, I'll pick up the "Tales of the Fire Maiden" thread pretty much where I left it, with Lachwen stuck in southern Mirkwood and trying to get back to the northern part of the forest, just in time for her sister Rufaniel to come tromping up out of Moria and drag her off to Rohan.

...which of course means I need to get busy on levelling up Rufaniel as well. Oops.