Arrived at Burbank after a pleasant trip on Southwest. Bob Hope Airport looks exactly like I would expect something called "Bob Hope Airport" to look: to wit, like a set from a '70s TV movie.

Then began The Peculiar Adventure of Gneech and

laurie_robey Trying to Get Their Rental Car. Two weeks ago we confirmed a reservation with Dollar Rent-A-Car for an SUV, mainly so that we'd be sure to have something where I could fit into the driver's seat. We sidled up to the counter, gave our name to the attendant, and she informed us that not only did they have no SUVs, they had no cars of any kind.

So we tried Avis: no cars. National: They could rent us a pickup truck for $200/day. Eeyeah, how about no? Finally we went over to Enterprise, which honestly is probably where we should have started since they've served us well in the past. They informed us that they did indeed have cars– they were being run through the wash as fast as people were bringing them in and sending them back out again– and would be more than happy to let us have one. At three times the cost we'd budgeted for Dollar, granted, but it's hardly a deal to pay a discount price and receive nothing in return, is it?

First, they brought around a Jeep Patriot, which would have been an excellent choice– except there was a very cranky guy who had apparently been waiting 45 minutes and had to get to his father in the hospital or some such who was quite peeved at seeing us trying the Jeep on. Well, having needed to get to the hospital before ourselves, we simply waved him into said Jeep and wished him on his merry way. We got better things to do with our time than to be bogarting cars during an emergency.

That left us with the next car, a Chevy Impala which would have done the job except for one thing: the radio was haunted. Specifically, it was stuck on one station (some variety of hard rock), at high volume, and could not be turned off, set to another station, or even have its volume adjusted. Not wanting to suffer the same fate as Dick Van Patten in High Anxiety, we waved that car on its merry way as well.

Finally we were presented with a Nissan Altima, which frankly does the job. Off to the hotel!

After a bit of decompressing from the flight, we headed off to Casa Suzukawa, to catch dinner with Vince and Dev. They very kindly fed us at Los Toros and then guided us to a Starbucks, and we spent the remainder of the evening gossiping about furries, being endeared and amused by the two of them being fidgety and high-strung at each other ;), and talking about the ins and outs of living in different cities. Dev also flattered me greatly by being fascinated with discussions of what's happened to Drezzer between the two Suburban Jungle series and knowing all kinds of fiddly little trivia details about the comic. ^.^'

Alas, as much as I wanted to stay, it was getting on 9:00, which to my body on east coast time was midnight, after I got up at 3:45 a.m. this morning to get on the plane. I needed bed. :P So we came back to the hotel, where we paused only briefly to wonder Who Is Number One? 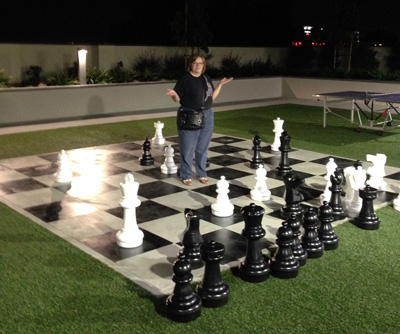 L.A. is actually much nicer than I expected, given the many things I've heard about it. I will say, there's a lot of sunshine here. Like more than I'm used to actually experiencing. I just got a February afternoon's worth and I'm a little sun-drunk. The traffic was also nowhere near as bad as I was expecting. I mean, I'm sure it gets bad and I don't want to pooh-pooh it, but given what I see in D.C. on a regular basis, I was expecting much, much worse. We drove surface roads to Vince and Dev's place during what should have been the height of rush hour, and while the freeways were backed up, it wasn't wall-to-wall gridlock like northern VA would be that time of day. I guess it's just a matter of what you're used to?

In any case, now it's time to shove in earplugs (because the sound-proofing at this hotel has undergone some kind of catastrophic existence failure) and get some SLEEEEEP. Off to Santa Barbara in the morning!

G'nite world, and have an awesome tomorrow. :)