It was a very big (and very long) day and I'm trying to make what notes I can of it before I pass out. After a large-but-yummy breakfast at the Apple Farm (Speaking of which, Inkblitzer very kindly Storified AJ's Stay, click to read it!) we went out on US 1 up the California coast.

There literally are not words. Next time I get afib I need to just go up that road again because it was heart-stoppingly beautiful. I can only begin to describe it like this: 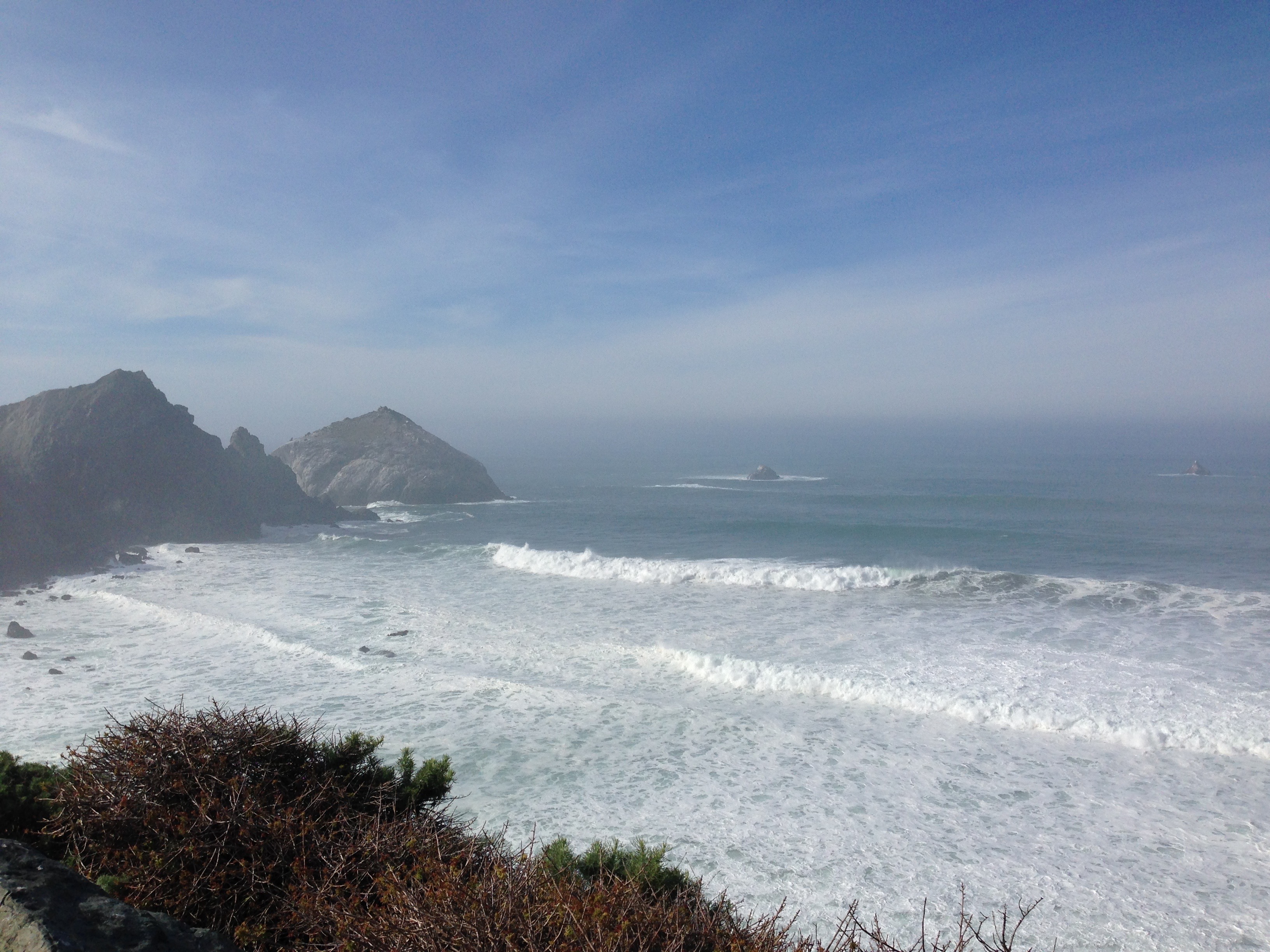 laurie_robey took a metric boatload of pictures, which we will post later as we can. Suffice to say, the Pacific Coast Highway lived up to its reputation and then some. If it was possible, I'd simply adopt the whole stretch of highway as my new home town.

We drove past Hearst Castle, but didn't stop because we had other fish to fry, so to speak. We drove through Carmel, which seemed nice enough and was one of the ones we wanted to check out but didn't really make that big an impression. On the recommendation of one of my Twitter followers, we decided to swing up to Pacific Grove and check out the home of the monarch butterflies, and instantly loved the place. It was a cozy and homey little town which is never far from the beach in any part, because it's out on a peninsula. It also blends almost seamlessly into Monterey, which had the same cozy and homey feel as long as you weren't right down on Cannery Row, at which point it was suddenly tourist trap.

We had a very tasty lunch in Pacific Grove, but I was thwarted twice in my attempts to get to a Starbucks– first because the nearest Starbucks was inside a Safeway and those are always iffy at best, and second because the next Starbucks was down at Cannery Row and there was just nowhere to park. So coffeeless, I held off until Santa Cruz.

Weird thing, Monterey Bay is one of the most beautiful places in the country, but you wouldn't know by driving around it, because you get shunted away from the coast and down a road between farms. I mean, some of it is still nice, but most of it is very much like any other agricultural valley, plus some giant smokestacks.

All that notwithstanding, we got around to Santa Cruz, where I finally got my Starbucks, Laurie finally got to see Bookshop Santa Cruz, some chocolates were sent off to AxiomAxiom, and our hotel was found. Santa Cruz is much the same as I remember it, both in the good ways and the bad. Last time I was here, Santa Cruz was the place most like what I was hoping for from a California town, but this time, in some ways, it's the weakest of the candidates still in the running (with the strongest, for me anyway, being a three-ways tie between Pacific Grove, Pismo Beach/San Luis Obispo, and Ventura). It's neighboring town of Capitola actually seems a lot friendlier, although we just passed through there, and in the dark, on our way out to Gilroy to see

Said trip out to Gilroy probably rates a whole post of its own, based on the scary ride over the mountains in the dark to get there, but I am very tired and need to get through this post. Just think of drunk Cary Grant and the music from North by Northwest and you'll get some idea of the experience. Fortunately Sirfie directed us to a way back to Santa Cruz that was considerably less of a knuckle-biter, which is a good thing considering how fall-over-dead tired I was by that point.

Anyway, we're headed back out to Gilroy in the morning and I intend to go through Capitola again, just to get a better look this time. There were a couple of houses there that really lined up nicely with my "dream house," and I would like to get a picture of one of them, as well as seeing if Capitola by day is anything like what it seemed to be by night.

Tomorrow will have some poking around Gilroy and Morgan Hill, some poking around San José and related points, and of course dinner at Andy's. :d It will also have dropping off the car (ending that particular adventure) and hopefully getting some heavy-duty sleep before our flight out Sunday morning.

I've got a lot of data to process now, and a lot of decisions to start making when I get home, some of which might be quite heavy. But I have a lot more information to go on, which means this trip has definitely served its purpose.

For now, I sleep. G'nite world, and have an awesome tomorrow. I love ya. <3