We played the second session of The Keep On the Borderlands last night, or as I like to call it, "The Kobold Armageddon of 2016."

The session picked up from where we left last time, with the heroes marching forth to find the Caves of Chaos. With the super-helpful directions they'd received from Old Bob ("go that way until you find a road"), and possibly because they had a wood elf ranger on the team, they did eventually manage to find an ancient and overgrown roadbed that eventually led them right there. 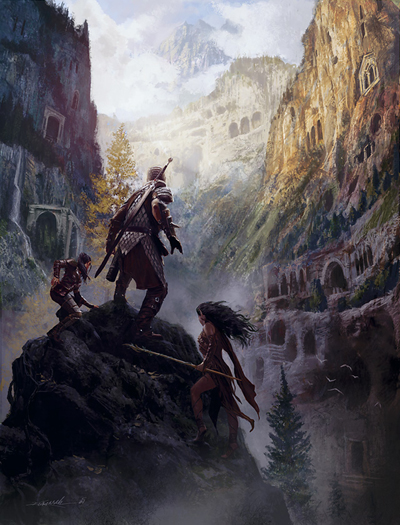 The Caves of Chaos, as painted by Michael Komarck

It turns out they actually were several different caves, all nestled in a ravine, that was lined with bones, twisted trees, and the occasional hungry-looking vulture. After a bit of discussing possible approaches, the group finally picked a promising-looking tunnel and decided to scout it out, with Nikki the anthro flying squirrel rogue scurrying up a tree to gain a good vantage point.

It was then that Nikki discovered that there was already a kobold in the tree, waiting in ambush for parties approaching the cave. Battle quickly commenced.

Because of where the players had specifically described positioning themselves, they were actually in a pretty good position to take on the kobolds, who instead of dropping on them from above had to leap down from the trees and run to the characters to engage. One of them attempted a heroic leap from one tree to another, only to botch its Athletics check and faceplant into the dirt.

This pretty much set the tone for the rest of the night. To put it mildly, the opposition was not having a good dice night.

The party made short work of the would-be ambushers, who all died saying things like "I'm sooo hungryyyy..." or "Lunch huuurts..." or (in the case of one who got a burning hands to the face) "I smell delicioussss..." Post-battle wrap up made it evident that these were lean and hungry, malnourished kobolds, who really needed a sandwich. Combined with the party's discovery in the last session of a band of kobolds who'd been wiped out by goblins, it became clear that these kobolds were at the bottom of the Caves of Chaos pecking order.

Togar the paladin and Sheala the wizard felt some sympathy for the poor kobolds; Nikki and Miskan the purrsian bard did not.

Into the kobold cave the party forged, quickly coming upon a guardpost just inside. Neither side had the advantage of surprise, and so each side simply waded into battle. Like the ambush outside, these kobolds were malnourished and clearly wearing thin. As Sheala advanced to get a better position, she stumbled onto a disguised pit trap, but succeeded her saving throw to keep from falling in. Rina the elf ranger attempted to leap past the pit, but botched the roll and fell down in, with the lid closing behind her, briefly taking her out of the fight.

The party quickly mowed down half of the kobold guards, causing the other half to run for reinforcements, shouting out alarms. They were knocked out by a well-placed sleep spell, but there was a new problem to face– swarms of rats, bursting through the walls of the pit, threatening to devour Rina alive. Brother Drang went down the corridor the guards had fled down to make sure they didn't wake up and make another break for it, while the rest of the party hurried to get Rina out of the pit, slamming the lid shut again on the rat swarms. They figured out that there were planks by the side of the pit, apparently what the kobolds used to come and go without falling into it, and so the party set out the planks so they could also safely avoid the pit themselves.

Then, the kobold horde came. 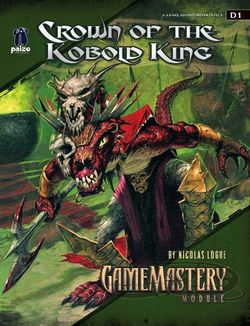 A seemingly-endless stream of kobolds surged up the corridor towards Brother Drang. Miskan briefly distracted the front ranks with an illusion of a sumptuous banquet, causing some of the kobolds to roll around in the illusory food like Scrooge McDuck rolling around in gold, and others to try to "eat" as much of the food as possible before their fellows could beat them to it. This gave Brother Drang the opening he needed to wade in and let loose with a thunderwave spell, blasting half a dozen kobolds and sending their bodies flying, but also making a tremendous boom that drew the attention of the kobold king and his personal guard.

Despite the devastation, the kobold horde kept coming, more of their warriors clambering over the bodies of their slain fellows. Now with the king there to provide discipline, the kobolds ignored the banquet illusion and began to attack in earnest, using their pack tactics to try to overwhelm Brother Drang. He blasted several more with another thunderwave, but it was clear that the tide was about to turn. Back at the cave entrance, the rat swarms had made their way out of the pit from somewhere down another corridor and returned, climbing all over Sheala and attempting to devour her alive.

Deciding that enough was enough, the party beat feet. Once everyone was past the pit, they pulled up the planks but Miskan (covered in rats but managing to succeed at a concentration check) cast another illusion that the planks were still there– this gave the party time to get away as the front row of kobold warriors went crashing down into the pit, and the rat swarms moved in for the feast.

It was a bad day to be a kobold. By the time the party made it back to a safe camp and managed a short rest, their tally came up with 30 kobolds slain.

Curse Your Sudden But Inevitable Betrayal!

They decided to return to the Keep to rest and heal up. There they once again found Brother Sampson, who bought them all drinks to toast their heroic slaughter of a bunch of starving kobolds. They spent the evening in conversation with him, finally coming to the conclusion that he had some form of past history with the mysterious cult in the Caves, despite his reluctance to go into details. While Sheala got blind drunk to forget the horrors of being swarmed by rats, Togar invited Brother Sampson to join the party on their next foray, despite Brother Drang's reluctance to trust the traveling monk.

The next morning, the party set out again. Based on Brother Sampson's information that the gnolls (who had kidnapped the Castellan's daughter) were in the upper caves, the party decided to go overland and come at the Caves of Chaos from the top, instead of climbing their way up from the bottom of the ravine. They stopped briefly at a ruined watchtower at the top of the ridge, deciding it would be a good place to make camp if they needed to later, then continued on to the Caves.

They picked what had once been clearly a finished opening with pillars and a terrace, now crumbled to ruin by the passage of time, and went into it, despite the ominous feel and stale, rank smell of it. Inside they found a grand, vaulted hallway with tile floors. Picking a direction, they found some closed doors, and listening at one, they heard hushed voices of conversation. Nikki, with a prodigious Stealth roll, snuck into the room and found several priests? Scholars? dressed in yellow robes, engaged in what could best be described as "evil prayer group."

The party swarmed in to attack, taking the cultists completely by surprise– only to have Brother Sampson and his acolytes attack the party from behind! [1] Unfortunately for Brother Sampson, the dice weren't being any better to him than they had been to the kobolds. Three attempts to cast hold person were thwarted by PCs making their saving throws, and his acolytes couldn't land significant damage on anyone. Meanwhile the cultists inside the room were cut down like so much wheat– even one who was healed up and had sanctuary cast on him couldn't escape without taking too many attacks of opportunity and dropping. Another sleep spell took down Brother Sampson, and the fight was over.

The party quickly cleaned up the mess, dragging the bodies into the cultists' room and closing the door, and tying up Brother Sampson with intention to interrogate, and we ended the session there. The party ended up one malnourished kobold away from hitting 3rd, so I was glad they only killed 30 instead of 31. ;P But as I said on Twitter, this group survived one of the three classic TPK spots of The Keep On the Borderlands and then went straight up to the Chaos Temple and began their incursion. This team is hard core, and I'm not going to worry about things being too tough for them any more. If anything, I'm going to have to make sure things aren't too easy for them.

[1] Ah, a good old Gary Gygax adventure. Three out of four people you meet will try to kill you. Is it a wonder players used to just kill anyone/anything they found in a dungeon?