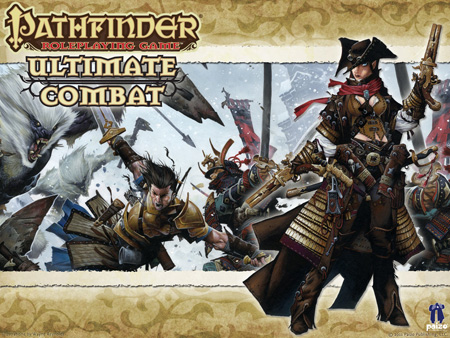 I remember the moment I was done with Pathfinder. I was trying to get my sputtering Eberron game to fly and I'd picked up a PF module, and one of the foes– not even the "boss fight" at the end mind you, but just a normal encounter in the middle of the adventure– had a stat block that was more than a page and a half long. Three-plus columns of 10-point type. I don't remember what the creature was, other than a general feeling of it being something along the lines of "fiendish half-golem mutant dreamlands giant oracle 4/barbarian 3/inquistor 2".

I literally looked at the page and said, "Oh, shut up."

People who've known me for a long time know that I jumped on the Pathfinder bandwagon early on and stayed with them for years. Given the options at the time, there were a lot of good reasons for doing so. But near the end of my run as a Pathfinder GM, my games were floundering. I kept trying to co-opt Star Wars Saga Edition for everything, or if that failed, switching to things like Savage Worlds so that there wasn't so much overhead in game prep and to keep fights from lasting hours... with varying amounts of success.

Now here's the thing. 3E was amazing in its day. Providing a framework to not only allow but to encourage all kinds of mixing and matching of creatures, classes, and templates threw open the gates for all kinds of new and interesting encounters D&D had rarely seen before. In 2E a vampire lizardfolk being the twist villain at the end of a module was enough to make it a "fresh and exciting classic." (I won't spoil it by saying which one, but grognards probably know already.) With 3E, you could do that all the time and feel relatively confident that the ruleset would support it.

So when Bruce Cordell tossed a vampiric gibbering mouther into Heart of Nightfang Spire (if I'm remembering correctly– it might have been Monte Cook's Return to the Temple of Elemental Evil?) it was kind of neat as gimmick, but also got snorts for being kind of silly. I myself used a similar trick when the players in my group destroyed a cursed magic item by feeding it to a gray ooze– only to have them attacked by a fiendish gray ooze for their trouble.

But that kind of thing is like cayenne pepper: a little bit gives the encounter a kick, but any more than that and you can't taste anything else.

Pathfinder, especially latter-day Pathfinder, is cayenne pepper soup with a side of cayenne pepper chips and a coffee with cayenne pepper cream. Most game systems tend towards inflation and bloat as they age, and 3.x was creaking under its own weight by the time Pathfinder rolled out. [1] PF cleaned up some of the clunkiest bits, which helped, but as the years rolled on and the pressure to keep adding new things carried on, it became this giant lumbering mess of a game, perfectly captured in visual form by the baroque and overwrought Wayne Reynolds art that is its hallmark.

What brings me to all this right now is that I've been invited to join an online Pathfinder game. Now I'm grateful to be a player in anything (and I promise not to kibitz about PF at the table!), so yesterday I pulled out Lachwen and statted up a 3rd level version. Thankfully, it's a "core" game, and I had Hero Labs to work with because I had forgotten (or blocked) so much of how 3.x/PF worked that it would have taken me hours to do it by hand. Using the "PC wealth by level" guidelines, she started with 3,000 gp and with that she bought... three numeric bonus items. Because that's how PF magic items work. I might go back and toss one of those out for a dozen spell scrolls or something that add a little more interest than a random +1.

It was the first time I'd looked at Pathfinder in any significant way in two years, and I was surprised at just how strong my reaction was to it, and what a difference 5E has made in how I look at the game. It also kinda makes me wonder what the gaming world would be like now if WotC had released 5E in 2008, instead of what we actually got. I have no doubt there would have still been edition wars, with nerds being the way we tend to be; but I don't think it would have torn the community so wildly apart.

[1] This is one reason WotC is being very slow and deliberate with its 5E releases. They don't want to have to make a new edition and risk another 4E schism again any time soon. 5E's deliberate modularity is also a hedge against this– just because a given subsystem exists, doesn't mean that you're expected or required to use it. A third of the DMG is systems like Sanity that only a few outlier games will ever bother with.
Collapse