Session four of The Keep On the Borderlands took a turn for the weird(er) last night. After kicking the collective butt of Red Hand Harry's gang last time (and reaching 3rd level), the party made a big ol' bandit bonfire with the bodies (carefully making sure it was downwind), then set up camp for the tiny little bit of night that was left. 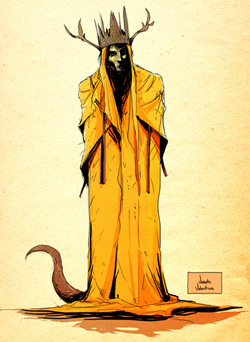 Per their usual routine, they intended to camp in three shifts, with two people up and on watch the whole time. Whoever took the middle watch... I'm not going to name names or anything... closed their eyes for just a second... and...

The party were suddenly all awake, with full gear, sitting in a campsite in a complex of caves, with no idea where they were or how they got there. After a few moments of WTFing,

The gricks were dispatched, but the evening wasn't about to get any less weird. Nikki scouted ahead to find that the caves all led to a large central chamber with a bottomless pit in the middle with altars on either side of it, and four differently-colored magic circles in each corner of the chamber. Standing in the yellow circle was a strange figure in tattered yellow robes, wearing a pale mask and a crown. Floating over each altar was a grell– bizarre monstrosities that consisted of a large, floating brain surrounded by tentacles and also with a beak. Larger cousins of the gricks? Something else entirely? 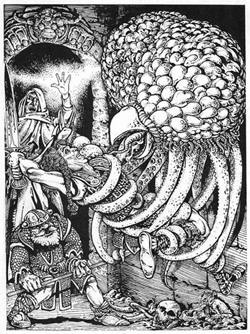 Whatever they were, the party decided (not unreasonably) that there was nothing in there that would do them any good, but there also seemed to be no way around it but through it. Miskan the purrsian bard determined that the one magic circle he could see (red) acted as some form of gate, while also acting as a damage buffer to anyone standing in it, which suggested the other magic rings also had some sort of function. So most the party bunched up at one entrance ready to rush in, while Togar (the dragonborn paladin) and Drang (the storm cleric) strode in through the entrance closest to the Yellow King to confront him.

As soon as they entered, the grell scooped up amulets bearing the Yellow Sign from the altars, carrying them towards the two groups as if in offering (despite Nikki's confidence that his scouting had gone completely undetected). In their minds, the characters heard a deep voice proclaim, "Kneel before me, for I am your king! There is no escape, even in death. Give yourselves freely, and be rewarded!"

This, as might be expected, didn't go over well. The most polite response was Togar's bellow of "Never!" although some of the less polite responses were also quite entertaining. The grell dropped the amulets on the floor and advanced menacingly, and battle was joined.

Togar attempted to tackle the King in Yellow, only to go flying right through him as it was just a projection, but also felt an unpleasant burning sensation when passing through the yellow circle. As the melee commenced, zombies began to appear in the middle of each circle, adding to the mayhem.

The fight was a tense, long battle. Fortunately for the PCs, the grell's attempts to grapple them were not succeeding, but unfortunately the zombies proved annoyingly durable, repeatedly being reduced to 0 hit points, only to stand right back up again. The players decided that the best way to deal with the zombies was to grapple them and shove them into the bottomless pit. This tactic proved quite effective, largely because the zombies kept rolling really badly to avoid the initial grapple.

Nikki and Rina the wood elf ranger, trying to find some way of breaking the Yellow King's sending, decided to destroy the altars by shoving them into the bottomless pits as well. This did have the effect of causing the vision of the Yellow King to vanish with a cruel chuckle, but the fight carried on. One grell was dispatched in messy fashion all over Sheala the elf magical girl wizard; the other was simply slain in a more straightforward manner. Finally the last zombie was tossed down the hole, and the characters all immediately woke up... in the bandit tower, no worse for wear other than being a bit freaked out.

It was late morning by that point, so the characters stuck with their agenda. Unfortunately,

sirfox had to bail for the last half of the session, so we decided to stick to mostly non-critical things in his absence. Red Hand Harry and the other two captured bandits were hauled back to the keep, along with all the recovered trade goods and captured gear. The Corporal of the Watch and Bailiff Delahuge were quite impressed at the capture of Red Hand Harry. The Bailiff didn’t have the funds on hand to deliver the reward immediately (they don’t keep that kind of money in the Outer Bailey), so the party was instructed to wait for a summons.

Then, there was shopping. Oddwall the blacksmith and Garrick the trapper bought armor and arrows respectively, but the group still ended up with ten sets of armor that nobody would take. The bandits' horses were also sold. Lizbeth the innkeeper wouldn’t let Sheala store the remaining armor in her room (“It smells up the place and is against the rules of the Keep besides!”) so eventually the group broke down and paid 1 gp/week to store it in the Keep warehouse.

Curian the jeweler was quite distraught at the news his caravan was never coming. The group inquired why he didn’t just travel with the guardsmen and the provisioners on their regular weekly trip to [next town west], to which he replied he wanted to go all the way to Pellak (capital of the kingdom), but the roads weren’t safe to travel alone. Apparently being stuck without a caravan in the Keep was still preferable to being stuck without a caravan in a podunk farming town.

Miskan and Nikki (by proxy) killed some time performing in the tavern, during which they heard a rumor that an elf had disappeared traveling across the marshes and that his companions were still looking for him.

The session ended when Percival (the nebbishy scribe who took the party's names and descriptions on their first arrival at the Keep) came and delivered a notarized summons for the party to enter the Inner Bailey and speak with Lord Blakewell the next morning.

This session's strange dream sequence battle with the minions of Hastur was something I cooked up completely, partially to take a break from dungeon corridors and tromping around the woods, but also to give Seifer a taste of 3E/4E style encounter design in contrast to the more old-school flavor of running Keep On the Borderlands straight. I was actually surprised, after the fact, at my own reaction to it– Ugh! XD It was a nice reminder of what a breath of fresh air 5E was.

I also felt a little bad about the negation of Nikki's sneaking, after last session when he so carefully blocked off the doors of the bandit hideout, only to have the bandits jump out the windows. In both cases there were reasons why it went that way (the Yellow King created the whole scenario so he knew what the players were doing the whole time in this session, and the bandits were simply panicked and would have jumped out the window either way in the previous), but it's always kind of unsatisfying to have to tell a player "It was a good idea, but it didn't help." On the other hand, Nikki got good use out of his new swashbuckler archetype abilities (from Sword Coast Adventurer's Guide), so that was good at least.

No game session next week due to family visits. But when we get back to it, it'll be time to finally meet Lord Blakewell.